Christmas in Prague - with some special traditions that you will love

You are invited to join Zen for an authentic experience of modern Prague.

The word comes from Latin “Adventus”, meaning arrival. Indeed it is the arrival of Little Jesus, and the Czechs prepare for the magical occasion by buying or making wreaths with four candles starting four Sundays before Christmas Eve. . At the end of each week they light one more candle on the wreath until Christmas week.

Here you will find centuries old traditions that you will love, especially in Prague. A multicultural metropolis, rich in history, culture, and folklore around mythical dragons, golems, and alchemical legend. It’s no wonder that Tolkien became the rage in Bohemia with all the vengeance of a Hobbit attack.  Thanks to an acclaimed translation by Stanislava Posustova, a librarian at Prague’s Charles University’s English department, who is also an independent translator. The Fellowship of the Ring finds newer and newer audiences around the Czech Republic.

That you would expect nothing less than a medieval feast to match, you will not be disappointed by the rustic nature of traditional Czech food – warm, hearty with ancient influences from surrounding European countries.

American Christmas has its own basics: Tree, ornaments, stockings by the fireplace, Santa Claus, presents, and a turkey feast. While more traditional families  observe religious rites, most of these traditions are vaguely European. But there are plenty of European Christmas rituals that are less familiar to adherents of American Christmas.

A jumble of pagan-influences, combined with old-fashioned regionalism, eureka, out comes a very delightful mix of Christmas customs–many of them connected to the traditional feast.

Uhh… Shoes are tied to marriage?

Bohemians, Moravians and Slovaks, have passed-down several traditional Christmas superstitions, and some are just as well known in other parts of the world as they are in the Czech Republic.

For instance if you are wondering whether you’d get married or not in the new year, there is a way to guess this too!. All you need is your shoe and a doorway. You stand with your back to the doorway, take your shoe and throw it in the direction of the door. If the toe of your shoe is pointing to the doorway, it means that you are leaving the house, and consiquently getting married. If not, you’ll have to wait another year.

This time it’s very easy. You take a walnut and crack it open. If the interior is healthy, you have a great future ahead… if it’s black and rotten, well, you know what to expect…

Now for the fun part….wallnut shells are saved for this tradition once the nut is consumed. E 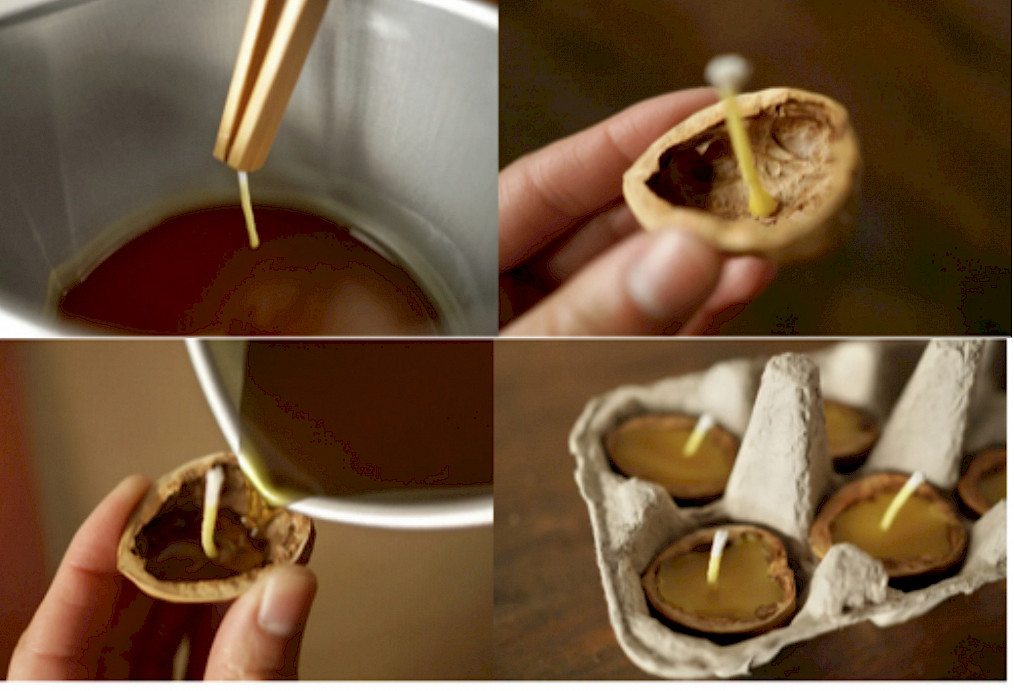 ach person takes one half shell and fills it with warm wax and sticks a little wick inside the hollow shell. All the shells are placed in a large container filled with water and the wicks are lit.  If all the shells remain together, it means,the family will stay together.. If there is a little boat that flows in another direction, it means that this person should expect some traveling in the upcoming year.

Expert tip for non Czech guests: always use different color candle so you know which boat is actually yours!

You will notice that once in the water the candles will begin moving, this is where the ‘fortune telling’ comes into play…  If the shell candles stay at the shore there will be no changes in the next year, if it sinks immediately you will most likely die (morbid thought) If it floats to the other side of the container, you get what you want!

If your candle touches another you can expect love and or friendship, if it begins to make a circle with others, respect, and friendship are foretold. If you find yourself in the middle of the other walnut boats, you will need protection. If yours is outside the circle, you will leave the family. Spinning in a circle means you don’t know what you want in your life and if the flame of your candle goes out it signifies a complicated emotional relationship. There you go, have fun with that one!

This time it’s not about your future, however according to tradition, you should apply some honey on your face on Christmas Eve. if you do so, everyone’s going to like you in the New Year. Popular among children, and healthy for your skin too.

Christmas is time for the Golden Pig

know in pre-Christian times pagans celebrated the winter solstice instead of Christmas?. The original symbol of the solar cult was a pig, which people connected with abundance and prosperity. The golden color being symbolic of the departing winter and the promise of spring. So only those who fasted all day long can view the Golden Pig on Christmas Eve.

Finally when the pig appears with the first star in the sky, the family prepares to sit down for Christmas dinner. Its inauspecious to stand up from the table during dinner, as this would mean that in the following year the whole family won’t be together. The Christmas dinner should be exactly nine dishes prepared that day. No one is allowed to eat any of the food before the first evening star appears in the sky and after dinner all the food that’s left over is buried in the garden – to guarantee a rich harvest the following year.

Though the Golden Pig is a superstitious Czech Christmas promise of wealth, happiness and prosperity, its festive and fun to participate, right?

The Celts who once inhabited this land may be the creators of this tradition.

Anyone who’s seen the Czech film “Pelíšky” knows the scene where Jiří Kodet’s character, Kraus pours molten lead into water and inspects the misshapen mass to try to forsee the future. When his wife inquires of him what he sees, his grim prophesy was “I give the Bolsheviks a year, two at most.”

So, you take the lead (yes, you are right, the metal) and melt it by heating. The molten lead is then dropped  into very cold water, some pour the molten lead  through the handle of a key, wait a few minutes for the metal to harden and then study the swirls and contours to see what the future will bring.

For example, a tree can signify hope where as a coffin is a sign to say good-bye to your dreams. And because this is the Czech Republic, a bottle indicates that everything will be all right.

Other readings focus on more abstract shapes and patterns.

For example, a tree can signify hope, where as a coffin is a sign to say good-bye to your dreams. And because this is the Czech Republic, a bottle indicates that everything will be all right. Other readings focus on more abstract shapes and patterns.

According to a report in Lidové noviny the practice is not so popular, perhaps seven percent of Czechs uphold this tradition today. The demand for lead in munitions escalated during the world wars, consequently making the metal scarce.

Substituting hot wax for lead would have the same results for an evening of Guess What ?

Fish attracts wealth into your home and life. 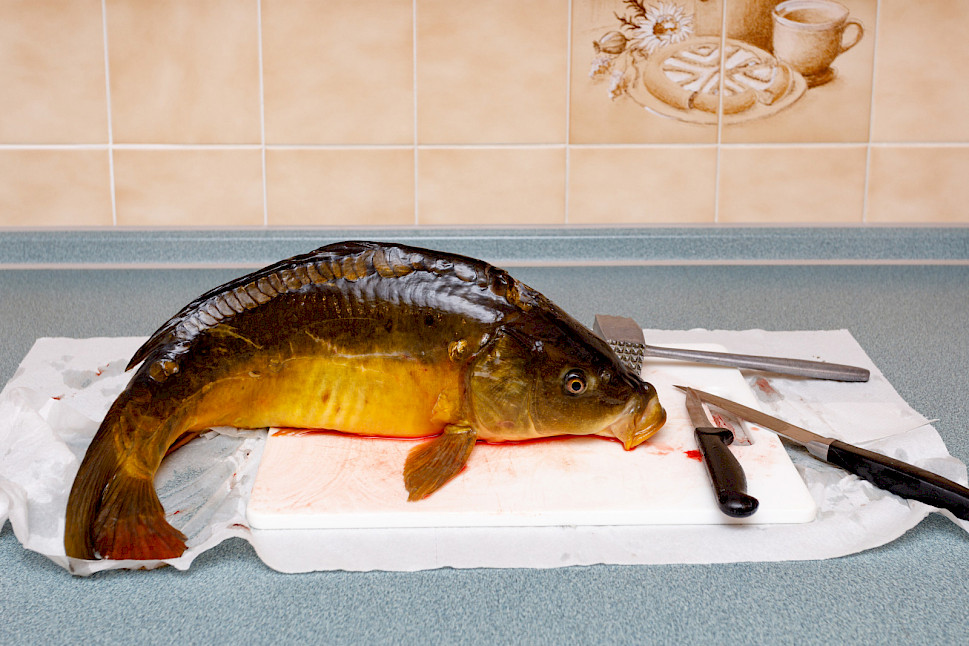 What Czechs and Slovaks refer to as a traditional Christmas holiday meal —its also popular in other parts of the world — including Austria and the French Alsace region — they also serve carp for their holiday meal.

On  Christmas Eve, the Czechs eat carp – fried carp or Carp soup. Or both. Today, a lot of young Czechs aren’t crazy about this tradition, since it is messy. Come December, fish is sold on the streets of Prague, and it’s either killed in front of your eyes, or kept alive in the bath tub. Then it’s up to you to kill it yourself and prepare it for your dinner. However vegetarianism and veganism upended this tradition when they were unable to go through with their plans to transform it into dinner by gutting and cleaning the carp at home like their ancestors. Nevertheless, there are some families who still like to do it.

And – now for the tradition.  Once the fish has been stunned and cut, it is cleaned, then soaked in milk (and sometimes salt) to diffuse the smell and “fishy” taste and sweeten the meat. It is sliced top to bottom, creating pieces in the shape of horseshoes, intended to bring good luck. Legend has it that the carp itself brings luck, too, one of the reasons it is said to have become the Christmas meal of choice. Fish has long been a symbol of Christ and Christianity. Once the fish is prepared, the scales are placed under the dinner plates and saved in their wallets to activate more prosperity. By the end of the following year, the old scale is replaced with a new one. Try asking the Czechs if they have “kapří šupinka” (carp scale) in their wallet. 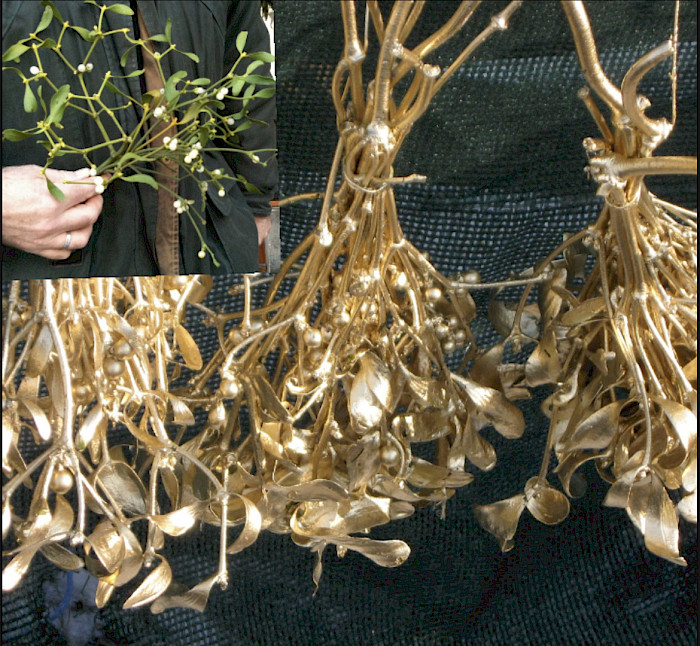 Not forgeting the most important universal aspect of the Christmas message of love, mistletoe may not be as unique as the others, but check it out.

Mistletoe called jmelí in Czech, is known for its infamous reputation as a place where you kiss your loved one when they are caught standing underneath it. Except in the Czech Republic, it’s not so much for kissing underneath as it is for decoration.

Here mistletoe is believed to bring good luck if it is received as a gift. It is also believed that it brings good fortune and wards off evil spirits.

Found in the world famous Christmas/Advent Market at Old Town Square in Prague, you can purchase all kinds of mistletoe from the multiple vendors who have set up their booths around the grand Christmas tree. Selling mistletoe both in its natural state, painted silver or gold, or plated silver or gold, which is more popular..

Czechs also make beautiful holiday wreaths out of their mistletoe. People then kiss under the branch and keep the mistletoe in their homes until the next Christmas. Which means that luck, happiness, love and courage will remain in their homes.

Veselé Vánoce! Merry Christmas everyone, see you in Prague!

If you wish to come on a private tour please contact us.